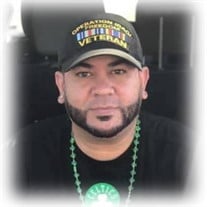 Patrick Fitzgerald Sullivan was born on May 21, 1976, in Santo Tomas Hospital, Panama City, Republic of Panama to John L. (Jake) Sullivan and Milka Neumann (nee Gonzalez). After high school, Patrick worked in the construction field with his good friend Manny Colon, in Massachusetts, after which he enlisted in the United States Army. After serving in the Baltics and several times in Iraq, over 10 years, Patrick left the military and joined KBR as a military contractor. Pat was a devoted Boston Celtics and New England Patriots fan, until Tom Brady went to Tampa and he became a Bucs fan, much to the chagrin of his father. Patrick is survived by his beloved Wife, Brenda Nieves, Daughters Tiana Palau (Mario), Ziomari Sullivan, Damaris Sullivan, Jazzel Velez and Thais Velez, Granddaughter, Giana Palau and Brothers, Leonel Guerrero, Edward Rodriguez, Joseph Newman, Sean Sullivan and sisters Jeanne Marie Caraballo, Zoe Johnson (Marvin), Eillen Rodriguez, Tiffany Sullivan and Maria Orsino, as well as an extensive list of family and friends. Simply put, Patrick touched the lives of many and will be truly missed by those whose lives he touched. In lieu of flowers, the family requests memorial donations be made to "Fairways For Warriors - Orlando" or "Wounded Warriors Project."

The family of Patrick Fitzgerald Sullivan created this Life Tributes page to make it easy to share your memories.

Send flowers to the Sullivan family.