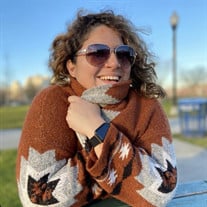 Casaundra Juarbes was born Feb. 15, 1989. A day after Valentine’s Day. Those who knew her, know that was the perfect day as Casaundra had an amazing heart. Casaundra was one of 9 children. You would never know she was one of the youngest, because her level of maturity and responsibility was so great. She grew close to family through her example of how she was Living Her Best Life. Taking care of her family while also living a happy journey. Nerissa Soto is her pride and joy. Along with Eli, Elizabeth, and Mimi. Casaundra was the consument caregiver. When she wasn’t trying to make you the most beautiful version of yourself, she was physically taking care of you. Casaundra went to beauty school and practiced that trade for a few years before she decided she would do more by becoming a nurse. While in school, Casaundra worked in a nursing home where she continued to share her heart with patients through her determined work. When Casaundra wasn’t being a Mom, a daughter, a titi, a granddaughter, a niece, a storyteller, a nurse, she was out there giving advice like the only rawest therapist would. Casaundra left this world too soon, on Jan. 24, 2022 at only 32 years old. She will be missed by all she left behind. Her mother, daughter, siblings, aunts, uncles, nieces and nephews, cousins, grandparents, and all her friends. Casaundra’s gift to all of us was bringing family together, near and far. Casaundra had an enormous impact on all of the lives she touched. She was indescribably vibrant and she continued to save lives by being an organ donor. In lieu of Flowers Please send donations for a trust fund that will be dedicated to her daughter Nerissa I. Soto

Casaundra Juarbes was born Feb. 15, 1989. A day after Valentine&#8217;s Day. Those who knew her, know that was the perfect day as Casaundra had an amazing heart. Casaundra was one of 9 children. You would never know she was one of the youngest,... View Obituary & Service Information

The family of Casaundra Janeth Juarbes created this Life Tributes page to make it easy to share your memories.

Send flowers to the Juarbes family.